Turning 5 is a pretty big deal. Its the age when your sweet little babe is no longer a babe. They are no longer, in fact, a toddler. They are a real kid! The birthday fairy sprinkles their magic dust on them while they are sleeping to make them one year older and, voila, your little one is all grown up! What?! You don'y have the birthday fairy visit your house for every birthday? You should really look into that!!

To celebrate my "new" kid we had an over the top birthday party. There was one theme: Mermaids. It was all so perfect. The kids were going to swim for most of the party s oI had lots of fun decorations around the pool. There was a walk the plank over a sea of sharks, a mermaid lagoon backdrop for pictures, kelp beds with lots of colorful fish along the walls, and about 20 hand made jelly fish hanging down.

It really was magical...until the monsoon hit! A monsoon storm has high winds, lots and lots of rain, lightening and thunder. So much for the swim portion of the program! And so much for all my decorations. The balloons were ripped from their strings, the sharks were literally blown away, every fish and kelp bed was washed out to sea.  I was devastated for about 5 seconds. Then it was back to the fun of watching my kid run around with 15 of her friends laughing, playing and being silly inside until the storm passed. The decorations were really for me anyways. Sadly, I only managed to get a few pictures...

Even though the decorations ended up in a wet mess the food was still great! And of course all the food went along with the theme.

Crab Sandwiches were part of the main course. I just filled croissants with typical sandwich fixings. Some were ham, some were turkey and all had lettuce and tomatoes.   For the fun part I simply glued google eyes to toothpicks. They were almost too cute to eat.

Next up were my world famous Squid Dogs. My 5 year old likes to call them Ursala dogs which makes them perfect for any Little Mermaid party. Follow the link to see how these guys get their amazing tentacles! 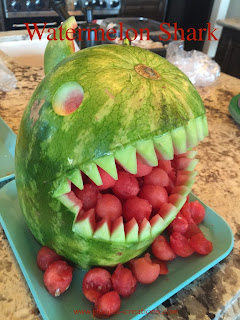 The most creative part to the menu was my watermelon shark.  I had a lot of fun making him! I am a self proclaimed pumpkin carving expert and felt that a watermelon wasn't that much different. I used a melon baller to hollow him out and to create the eyes. I used part of the mouth that I cut out as a fin. It was a bit messy making him as the juices ended up all over the floor. It was worth the mess!!

I had to dive into the world of pinterest to find these fun cookies. The shortbread cookies were perfectly shaped to look like an oyster shell. I then used frosting for the inside parts and a marshmallow for the pearl. I wanted to use white m & ms for the pearl because the marshmallow dries out and gets hard but couldn't find any. 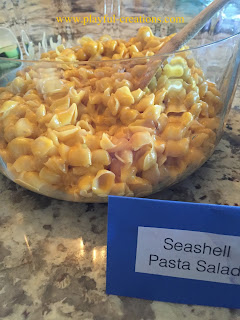 This was a super easy addition to an under the sea menu. It was just shell pasta macaroni and cheese straight out of a box. Still creative though...right? 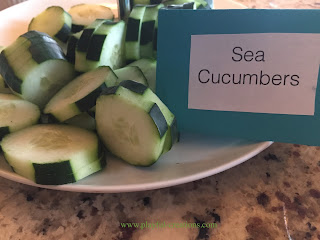 I loved the sea cucumbers as an easy way to get some veggies onto a plate. I also had carrot sticks which I affectionately called "Crab Legs." 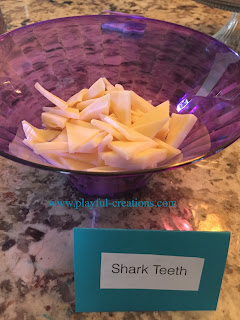 Some cut up white cheese made a perfect bowl of shark teeth.

These party favours were an easy, no sew option. I bought hand towels and used rubber bands to create the fins. I took half of the bottom of a towel and wrapped a rubber band around the corner. I did the same to the other side. Then I rolled the rubber bands up until they met in the middle. 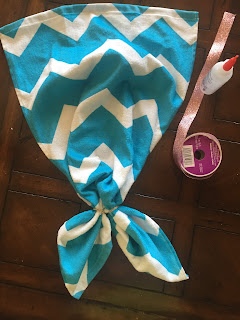 Next I glued ribbon to the top so that the kids could tie them around their waist. Be sure to measure out the ribbon so it makes an easy bow when you tie. 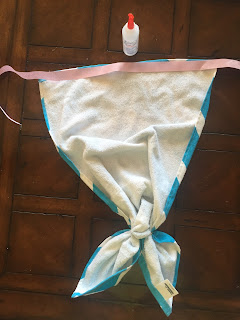 I then presented them in a sand pail with a few other prizes. 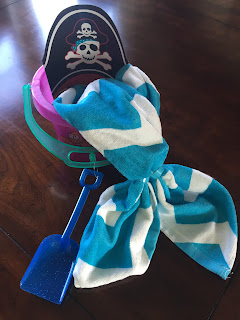 If you enjoy Playful Creations then subscribe via e-mail:

Amy
Welcome to my Playful Creations! My name is Amy and I am a fun stay-at-home mom with a vivid imagination. I am always thinking of new ways to entertain my kiddos (and myself!) I started pulling together recipes and craft ideas from my imagination and beyond in hopes to bring more smiles to the world. I am also a Taurus that loves red wine and long walks on the beach.

Promote Your Page Too